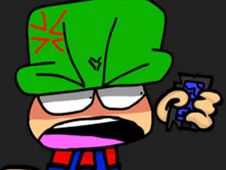 What is FNF Bambi’s Aggrivation Mod?

FNF Bambi’s Aggrivation Mod is going to be one of the most difficult rhythm battles you will have against Bambi from FNF so far because he has become really aggravated, and when he is mad, he is a force to be reckoned with, even more so since he has quite a few songs to battle you on:

Make your choice between the story mode or free play mode, and in either case, give it your best to win by reaching the end of the songs, doing so by playing their notes according to the charts. So, when arrow symbols float and match above BF, press the identical arrow keys at the same time.

If you miss hitting notes multiple times in a row, you lose and have to start again from scratch, so be careful not to let it happen. Good luck, enjoy!