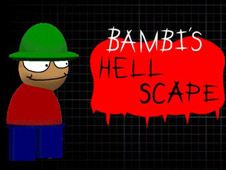 What is FNF vs Bambi’s Hellscape?

Bambi from FNF has been quite a popular character in the series, but today he is making his return in more forms than one since he has become possessed, just in time for Halloween, we would say, and he can assume all sorts of demonic shapes and bodies, with you having to help BF defeat him on all of them, something that you do on all these following songs:

Defeat hellish Bambi and free him of his demons!

After choosing to face this character in either the story mode or free play mode, give it your best to reach the end of the songs by playing all their notes according to the charts, since that is how you achieve victory.

To play notes, watch for when arrow symbols above BF match one another and reach the end of the songs to win. Be careful not to miss pressing the keys multiple times in a row, since that leads to you losing. Good luck, and all the best we wish you!