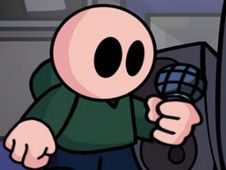 What is Friday Night Funkin' Riddle School and Phil Eggtree?

We hope you did not think that we were done with bringing you new FNF Games online on our website today because that is far from being true, and right at this moment, we are sharing with you the game called Friday Night Funkin' Riddle School and Phil Eggtree, which brings over to the FNF world a character from the Riddle School Games series, of which we also have here on Play-Games, obviously!

Phil is the series' main character, a stickman-looking kid with a bald head and huge black eyes, who wears a green hoodie, blue trousers, as well as brown shoes. The two custom songs that you will battle him in as Boyfriend are called Hall Pass, and Beaver Spit. In order to battle him, go to the Pico week, since that is where you will find Phil, replacing Pico.

To defeat him, you need to have better rhythm than the antagonist, of course, and so, be focused! When you see the arrow symbols over BF's head match with one another, at that same moment you will hit the same key on your keyboard to hit the note, and if you miss it, it's bad, because multiple consecutive misses mean you lose the game.

Good luck, and we hope you enjoy this game plenty, as you always do our new FNF Games!