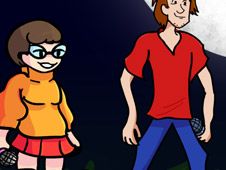 What is FNF Shaggy X Velma?

It seems that after Shaggy got defeated so many times by you and Boyfriend, he thought it to be enough, so he enlisted the help of his fellow Mystery Gang member, Velma, and the two of them believe they can destroy you and BF, so prove them wrong by beating them up on all these following custom songs, where for the fourth one even Matt from Wii appears to help them:

Defeat the power duo of Shaggy and Velma with your amazing rhythm skills!

In this awesome mod, where you can play in either the story mode or free play mode, you have the goal of reaching the end of the songs, which only happens if you play all their notes accordingly, and then you will become the winner.

Be careful not to miss pressing the keys too many times in a row, since that means losing. To hit notes, press the arrow keys at the same time as the identical arrow symbols match above BF's head.

Good luck, we wish you the best, and hope to see more of you here, since fun never stops on our website!