Tails get Scared but is a FNF Mod 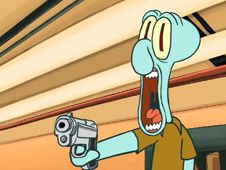 What is FNF vs Squidward gotta get spongebob back?

FNF vs Squidward gotta get spongebob back is going to be the funniest FNF mod with Spongebob you play today, where you actually have a rap battle as Boyfriend against Squidward because winning it is how you get Spong back, which is based on a funny viral video from the Internet. Let's begin!

BF Vs Squidward, the battle to get Spongebob back!

As the song progresses, when your turn to sing in the chart comes, you will see arrow symbols float and then match above BF's head, a moment when you will have to press the identical arrow keys from the keyboard, and if you keep at it until the conclusion, you win. Be careful not to miss hitting multiple notes in a row, or you lose and have to start again from scratch. Enjoy!