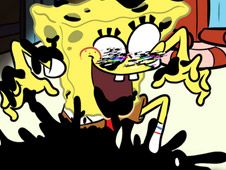 What is FNF Vs. Glitched Pibby SpongeBob?

Noooo! It seems that even poor Spongebob has been infected by the Pibby virus, and you now have to defeat him to snap him out of it, something we invite you to do right now on the song called 'Ready or Not', which we're totally positive you will rock!

Defeat corrupted Spong and save his day!

After hitting the play button, as the song progresses, arrow symbols will float and match above BF's head, a moment where you have to press the identical arrow keys in order to hit the notes of the song at the right time.

Keep doing so until the song ends to win, but be careful not to miss too many of the notes in a row, because that will lead to you losing and having to start again from scratch. Good luck, enjoy!