Funkin in the Kitchen with Spongebob 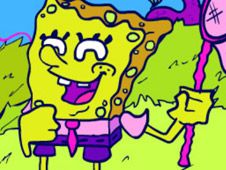 What is FNF Barnacle Funkin vs SpongeBob?

FNF Barnacle Funkin is a new mod featuring SpongeBob, but also Patrick, Plankton & Squidward as antagonists for you and Boyfriend to defeat in rhythm battles, something we invite you to do right now on the following amazing and extensive tracklist:

See how fun Barnacle Funkin is with this new FNF vs Spongebob mod!

Whether you choose to play in the story mode or free play mode, you win in the same way in both of them, by reaching the end of the songs, something that is done only by hitting your notes according to the charts until those points.

So, press the arrow keys at the same time as the identical arrow symbols match above BF on the right. If you miss doing it too many times in a row, your health bar depletes and you lose, which forces you to start again from scratch. Enjoy!