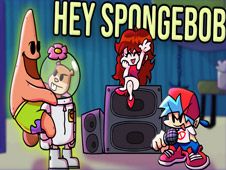 It really is a good day to be fans of Friday Night Funkin' Games online, considering that they have appeared one after another today, and right now we invite you to play one based around a scene from the show where Sandy gives Patrick a piggyback ride. There is one song you are playing on, and it is called Seizure Showdown!

Hey, let's sing and dance with Patrick and Sandy!

Hit the play button to start, as there is only one mod, and give it your best to reach the end of it by playing all of its notes according to the charts, something for which you use the arrow keys.

How? Well, when you see arrow symbols matching above your character's head, you press the identical arrows from the keyboard. Be careful not to miss pressing the keys too many times in a row, or you lose. Good luck, we wish you the best!