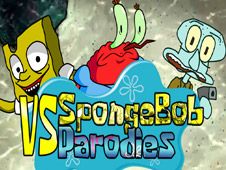 What is FNF Vs Spongebob Parodies?

Various SpongeBob Parodies have been created on the internet over the years, and those wacky new characters now become antagonists in one of our best FNF mods ever, where you and BF will have to go up against them in a rhythm battle, something we invite you to do right now on the following tracks:

Whether you choose to play in the story mode or free play mode, you win by reaching the end of the songs in either case, something that is done by hitting your notes according to the charts.

This is done by pressing arrow keys at the same time as the identical arrow symbols mare matching above BF's head, but be careful not to miss doing it too many times in a row, or you lose and have to start again from scratch. Enjoy!