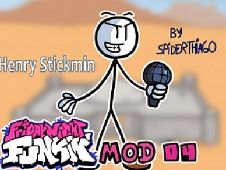 What is Friday Night Funkin vs Henry?

Henry Stickmin is the new protagonist of the Friday Night Funkin game in which you will have to start a war against him. Great care, because Stickman is very good at dancing.
In this mode you will be able to dance on the following songs:
Week 1: Break-in, Midnight;
Week 2: Tickets-please!

He appeared in many online games, but the best known were those in which Henry had to escape from prison or the game in which Stickman had to steal the diamond and not be caught by the police.

He is probably one of the simplest characters, and his appearance can be reproduced by any child, because he is a Stickman is just a sketchy character, who has a body consisting of one line, his hands two lines, and his legs two other lines. He wears a pair of brown shoes on his feet, and his head is oversized to his body, and he is white with his eyes formed by two large lines.

use the arrows to dance!