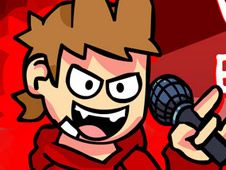 What is FNF vs Tord (Red Fury Edition)?

Tord returns in FNF with the Red Fury Edition mod, where this beloved character from Eddsworld returns with plenty more new songs for you to enjoy doing battle against him:

From the game's main menu you have to make a choice between the story mode and free play mode, after which you need to give it your all to focus and hit all your notes according to the charts, doing so until the song ends to win. So, watch for the moment when arrow symbols floating match above BF's head, and press the identical arrow keys at the same time.

Be careful not to miss hitting those notes too many times in a row, because if that happens, you end up losing and having to start again from scratch, and you can't want that to happen. Enjoy!