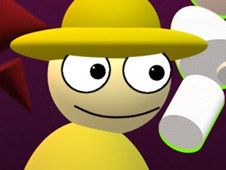 The FNF Manny Edition mod has now reached V3, meaning that you get to sing on a whole new range of songs, something you are surely going to enjoy, even more so when you see this tracklist:

Whether you play in the story mode or free play mode, you win in the same way, by reaching the end of the songs, something you can only achieve by hitting notes according to the charts until the end of the said song.

To do it, press the arrow keys at the same time as the identical arrow symbols match above the character on the right. If you miss said notes multiple times in a row and the health bar depletes, you lose instead. Enjoy!