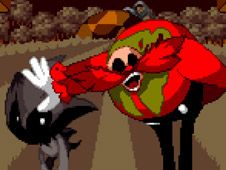 FNF Sonic.EXE Burning – Nove Edition is yet another mod that we highly recommend you all play free of charge on our website right now, as with any and all other mods we've brought you here so far, which are always a blast!

Defeat Sonic.Exe in FNF on the Burning Song, Nove Edition!

Reach the end of this one track to win, doing so by hitting notes according to the charts until you get to that point, which is done by pressing arrow keys at the same time as the identical arrow keys match above BF on the right. If you press the wrong keys, or at the wrong time, or even not press them at all, you miss notes.

If you've missed too many notes in a row and your health bar depletes, you lose and will have to start all over again from scratch, simple as that. Good luck, enjoy!