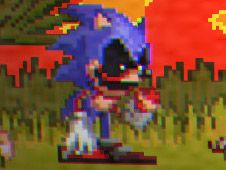 What is FNF Sonic.exe Genesis Edition?

A Genesis Edition of Sonic.Exe has now appeared in the universe of FNF Games online, where you and Boyfriend revisit the classic songs that made this mod so popular only with a whole new look, of course:

Try the FNF Sonic.exe Genesis Edition and see why it's awesome!

In either mode, you will be playing, reach the end of the songs by playing their notes according to the charts to win. How do you do it?

Well, when floating arrow symbols match above BF, you need to press the identical arrow keys. Keep at it until the end, because if you miss notes, your health bar depletes and you lose.

It's that simple, so now that you've been made aware of this, you should be ready to give the game your very best, and enjoy it as only here is possible!