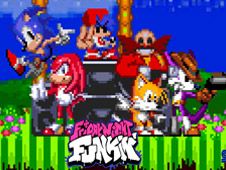 What is FNF Genesis Rappers in Sonic Universe?

Welcome to the amazing FNF Genesis Rappers in Sonic Universe mod, where you have countless characters from the Sega Genesis saga of Sonic Games as antagonist rappers for you and BF, who you have to defeat right now on all the following amazing songs:

Help BF defeat the Genesis Rappers of the Sonic Universe in FNF!

Whether you're facing your new opponents in the story mode or free play mode, win by reaching the end of the songs, something that you do by hitting your notes according to the charts until their conclusion.

To do it, press arrow keys at the same time as the identical arrow symbols match above BF, but be careful not to miss hitting the notes too many times in a row. Good luck, enjoy!