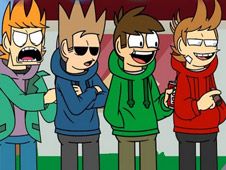 What is FNF vs Eddsworld (Blantados Edition)?

We hope that right at this moment you are ready to have even more fun in our category of Friday Night Funkin Games online, where our team right now wanted to share with each and every one of you the amazing new mod called FNF vs Eddsworld (Blantados Edition)!

What this new version of the Eddsworld mod brings along to the table is that it is created by a very talented modder, first and foremost. Everyone will sing Norway, but the arrows change, and so do characters for every turn. Awesome!

Be careful so as you don't miss pressing the keys too many times in a row, because if that happens, you lose and have to start again, something we don't hope happens to any of our players. Good luck!