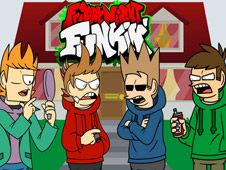 What is FNF Vs EddsWorld?

Crossovers between Friday Night Funkin' and EddsWorld have been very successful so far, and while we've had a few mods featuring Tord, a mod where you got the original songs but sung by characters from this animation, now we offer you one of the most full-fledged FNF EddsWorld mods, because in this one features four characters, Tom, Edd, Tord, and Matt, and you duel them in four original songs:

You can choose to rhythm battle these characters in either the story mode or the free play mode, you pick a level of difficulty, and then give it your very best to reach the end of the songs with the progress bar in your favor since that is how you win.

To achieve that you need to have a good rhythm and play all the notes of the songs at the right times, so when arrow symbols above BF match, you press the same arrow key.

Be careful not to do that at the wrong times, since too many notes missed in the song will cause you to lose the battle. Good luck, enjoy, and have fun!