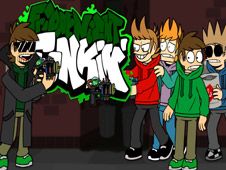 What is FNF Eddsworld: WTFuture Mod?

In the WTFuture Mod, an Edd from the future has come back in time to kill the Eddsworld gang, so now you have to stop him through rhythm battles, with this game having a full-fledged story and four awesome songs:

Let's dive into the FNF WTFuture mod with Eddsworld!

Whether you are playing in the story mode or free play mode, to win you have to do the same thing, which is to play your notes according to the charts until the song concludes, without missing hitting them too many times in a row, because if that happens you lose.

How do you hit notes? Well, when you see arrow symbols match above your character on the top right, that is when you press the identical arrow keys. Easy-peasy! Let's start all the fun right now, as only here is possible!