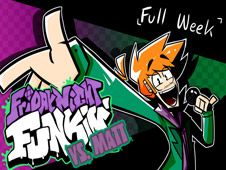 What is FNF vs Matt Eddsworld?

All the previous crossovers we've had between the FNF Games series and the Eddsworld universe had been received very well, and we're sure that this is going to be true right now as well when our administrative team is inviting you all to play the game called FNF vs Matt Eddsworld, where Matt is an orange-haired boy who is always checking himself up in a mirror that you have to now defeat in a musical battle.

This is a full week mod that features three awesome custom songs for you:

Will Matt be a worthy challenger for Boyfriend? Let's find out!

You can face off against this character in either the story mode or the free play mode, it's up to you, and in both of them, you have to give your best to play the notes and sing the tunes so well that by the time you reach the end of the song, you will have won.

Playing notes is done using the arrow keys, so, when it is your turn, watch for the arrow symbols matching above BF, and match them by pressing the same arrow keys at the same time.

Don't miss doing it too many times in a row, or you lose and have to start again. Good luck!