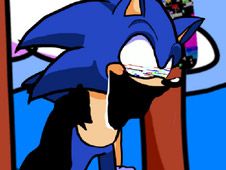 What is FNF x Pibby vs Corrupted Sonic Edition?

Unfortunately for him, Sonic and friends got the Pibby Corruption of FNF, but you and BF will get the amazing chance of having a rhythm battle against them and clearing them of it, something that you do on the following amazing tracklist:

Let's defeat the Pibby Corrupted Sonic and his friends, only in FNF!

You will choose between the story mode and free play mode from the main menu, and then, in either case, give your best to reach the end of the songs by playing their notes according to the charts, which is how victory is achieved.

This means that you watch for when arrow symbols match above BF, on the right, and press the identical arrow keys at the same time. If you miss doing it too many times in a row, you lose and have to start again from scratch, so focus and win instead!