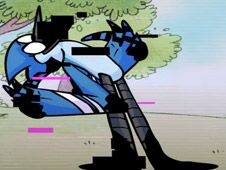 What is FNF vs Corrupted Pibby Mordecai?

Mordecai from CN's Regular Show has been corrupted by the Pibby virus, and this new and evil version of him is now going to become the latest antagonist that you and Boyfriend have to face off against in a rhythm battle, winning to snap him back to his former self, something you do on the song called “Gamers”!

Use music against Pibby Mordecai, the only way to overcome him!

In order to win you need to reach the end of the song, something you do by playing all their notes according to the charts, so when you see arrow symbols match above BF's head, press the identical arrow keys from the keyboard.

Be careful not to miss hitting too many of those notes consecutively, because if that happens, you lose and have to start all over again from scratch. Good luck, and all the best we want to wish you all!