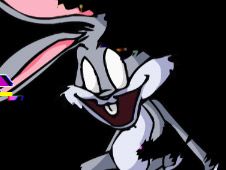 What is FNF vs Pibby Corrupted Bugs Bunny?

The corrupted versions of your favorite cartoon characters keep on coming over to the FNF Games series for you to defeat them in rhythm battles, precisely what we are excited to invite you all to do right at this moment with the awesome addition of FNF vs Pibby Corrupted Bugs Bunny, where you will have one track known as 'Bugged'.

Use music to defeat corrupted Bugs Bunny and bring him back to normal!

Hit the play button to start, and, then, when your turn comes to sing, hit all the notes you have in the chart, something you have to do until the song ends in order to win the game.

To hit those notes, you watch for when arrow symbols match above BF's head and press the identical arrow keys from the keyboard. Be careful about missing to hit those notes multiple times in a row, or you lose the whole duel and game. Good luck, enjoy!