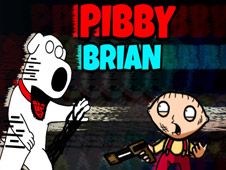 What is FNF X Pibby vs Corrupted Brian?

Now that Brian from Family Guy got Corrupted with Pibby, only you and Stewie remain, so you have to help him out in defeating his dog best friend in a rhythm battle, the only way to bring him back, something that you do on a track called 'Rooten Family'!

Watch for when the arrow symbols float and match above the top right side of the screen, and when they do, press the identical arrow keys from the keyboard to hit your notes, something that has to be done until the song concludes for you to win.

Be careful not to miss hitting the notes too many times in a row, because that happening means you losing and having to start again from scratch. Good luck, enjoy!