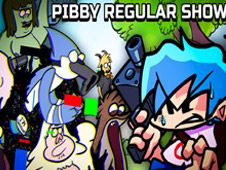 The Pibby virus has corrupted the Regular Show characters and made them glitchy, so only an FNF battle between you and Boyfriend and them will bring them back to their former selves, something we invite you to do right now in this awesome demo mod with only one song, but a really cool one, called 'Fallen Power'.

Hit the play button to start, and, then, when you see arrow symbols match above BF's head, you need to press the identical arrow keys and keep at it until the song concludes to win.

Be careful not to miss doing that multiple times in a row, because that leads to you losing and having to start again from scratch. Good luck, enjoy, and all the best we wish you all!