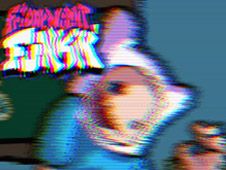 What is FNF vs Pibby Corrupted Finn & Jake?

It was only a matter of time before Pibby Finn and Jake from Adventure Time were to make their debut in our category of Friday Night Funkin' Games online, where right now you go up against these corrupted Cartoon Network characters on three awesome and scary songs:

Return Finn and Jake to normal through the power of music!

Whether you choose to play this game in the story mode or free play mode, the way to win is the same, which is by reaching the end of the songs, which in turn you do by taking the songs all the way to their end.

This means that when arrow symbols above BF match one another, you have to press the identical arrow keys, but if you miss doing it multiple times in a row, you lose. Avoid glitch notes, hit sword notes, watch out for health drains. Good luck!