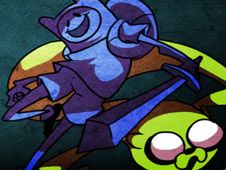 What is FNF x Pibby vs Finn & Jake – CN Takeover?

The Pibby virus has taken over CN characters such as Finn and Jake, so you and Boyfriend now have to defeat them through music in this new rhythm game on the following tracks:

Stop the CN Takeover by defeating Pibby Finn and Jake!

Whether you are playing in the story mode or free play mode, to win you have to do the same thing, which is to reach the end of the songs by hitting your notes according to the charts.

How do you do that? You press arrow keys at the same time as the identical arrow symbols match above BF's head, without missing to do it too many times in a row, or you lose. Good luck, enjoy!