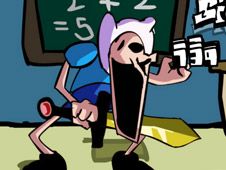 What is FNF vs Pibby Finn?

Pibby Finn is a comical and meme version of Finn from Adventure Time on Cartoon Network, and your latest musical antagonist in the world of Friday Night Funkin' Games online, with our team being very happy that we can now share with you this awesome game, even though it only has one song by the name of “No hero”.

Use music to defeat the non-heroic Finn!

In addition to the normal rules of the gameplay, some new mechanics have been added, so make sure to remember that you must avoid black glitch notes, you should always hit the sword notes, and even if Glitch Finn is singing and draining your health bar, you won't die, so take notice of that.

Get to the end of the song to win, playing all of its notes according to the charts to do that, by pressing arrow keys at the same time as the identical arrow symbols match above BF's head. If you miss doing that multiple times in a row, you will lose and be forced to start all over again from scratch. We wish you the best, and tons of fun, as per usual!