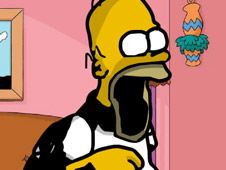 Homer Simpson is now corrupted by the Pibby virus of FNF, so we invite you to help Boyfriend defeat him and get him rid of it, so he can go back to his usual self, something you will be doing right now on the following tracks:

In either mode you are playing, reach the end of the songs by hitting their notes according to the charts to win, something you do by pressing arrow keys at the same time as the identical arrow symbols match above BF.

Reach the song's end to win, but know that missing to hit your notes too many times in a row ruins the chart and causes you to lose. Good luck and the best we wish you all!