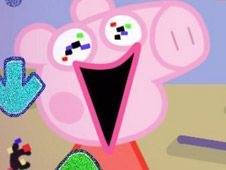 What is FNF Pibby Vs Corrupted Peppa Pig?

Peppa Pig got the Pibby virus and is now Corrupted, and only you and BF can save her from it by defeating her through music in a rhythm battle, something that you are right now going to have tons of fun doing on the song called 'Discovery Glitch'.

Defeat Corrupted Peppa Pig and free her of the Pibby Virus in FNF!

To win the musical battle you need to reach the song's end, and to do that you need to hit your notes according to the charts, something that you do by pressing arrow keys at the same time as the identical arrow symbols float and match above BF. Be careful not to miss hitting notes multiple times in a row, or you end up losing and having to start again from scratch. Enjoy!