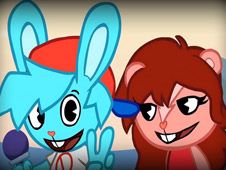 In our new FNF Happy Tree Funkers Mod, Boyfriend is now a bunny, Girlfriend is now a squirrel, and the reason for that is because they have been transported into the world of Happy Tree Friends, where all the characters are animals, so help this new and improved BF defeat his animal antagonists right now, on the following songs:

Happy Tree Funkers is the FNF mod you need right now, play it!

After you make your choice between the story mode and free play mode in the main menu, you need to win by reaching the end of the songs, something that you do by playing all of BF's notes according to the charts.

That is done by pressing arrow keys at the same time as the identical arrow symbols float and match above BF's head, but if you miss doing it multiple times in a row, you lose and have to start again from scratch. Enjoy!