FNF VS Plants vs Zombies Replanted 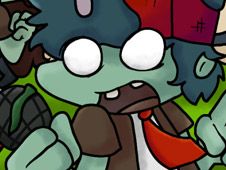 What is Plants vs Funkers?

Boyfriend Zombie is now in the PvsZ universe, where he has to defeat other zombies and plants as well in musical battle, not in the regular tower defence mode that you were used to from that universe, but with musical notes and dance routines, which we are sure you will really appreciate and have tons of fun with, especially with such an awesome tracklist:

It's now an FNF battle of Plants vs Funkers!

Choose between playing in the story mode and free play mode from the main menu, and then give your best towards reaching the end of the songs, which is when you win, and you achieve this by playing your notes according to the charts until the end of the song.

So, when you see floating arrow symbols match above BF, press the identical arrow keys, without getting the timing or keys wrong too many times in a row, which leads you to lose the battle. Good luck, enjoy!