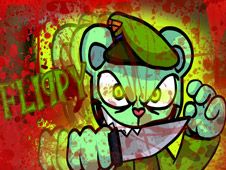 What is Just Another FNF vs Flippy Mod?

Flippy is constantly one of the most popular characters in FNF, and he comes from the already-popular Happy Tree Friends Games series, and while there have been plenty of full weeks mods featuring him here already, this new one only features one song called 'conscience'.

Defeat Flippy in FNF once again!

You win by reaching the end of the song, and to achieve that you need to keep hitting your notes according to the charts until that conclusion. So, when you see arrow symbols float and match above BF, press the identical arrow keys at the same time.

Presing the keys too early, too late, or on a wrong one means a miss, so be careful, because if you have too many misses in a row, you lose and have to start again from scratch. Good luck, enjoy!