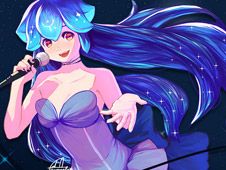 What is FNF Indie VTuber Showdown?

Crystal is an independent VTuber, who are anime girls who stream on the internet, and she wants to make it big by winning a rhythm contest, getting some money to futher her career, so if you are ready to play this brand new FNF mod and play as her, you will help her win the battles, with two songs being now available, the Tutorial one, and Whale Waltz.

In either the story mode or free play mode, when you see arrow symbols above the girl's character match one another, you have to be fast and press the same arrow keys yourself, and keep doing it until the end of the songs in order to win. Be careful about missing notes, because if you do it too many times in a row, you lose the whole game.

It's all that simple, and now you know what to do, so give this game a go right now, see for yourself why it's the best!