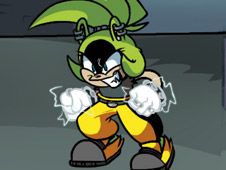 What is FNF: Metallic Showdown?

FNF Metallic Showdown presents a rhythm battle of Metal Sonic vs Surge, the new character you are now going to become and have plenty of fun with, no doubt, all on the new track called 'Insurgency'!

Who will win the FNF Metallic Showdown: Metal Sonic or Surge?