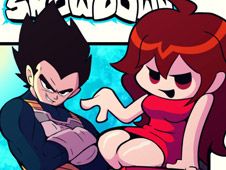 What is FNF Saiyan Showdown vs Vegeta?

It's time for an FNF Saiyan Showdown against the one and only Vegeta, one of the most powerful characters in DBZ, but is he just as strong with musical rhythm as he is with punches? Let's show him not by defeating him on the following tracks:

Whether you are playing in the story mode or free play mode, reach the end of the songs by playing their notes according to the charts to win. How?

Well, when you see arrow symbols float and match above BF's head, that is when you press the identical arrow keys. Be careful not to miss hitting the notes too many times in a row, or you lose. Good luck, enjoy!