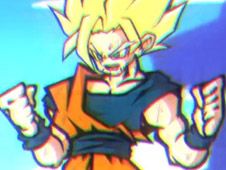 Goku faces Sad Majin Vegeta in the new FNF Llamao de EmergenZia mod crossover with DragonBall Z, without a doubt the world's most popular anime, so right now we're positive you are going to have quite an awesome time cheering up this usually though character!

There's only one song, the one in the title, at the end of which you need to reach by hitting your notes according to the charts to win. To do it, press arrow keys at the same time as the identical arrow symbols match above Goku. Miss doing it too many times in a row, and you will lose. Watch out for the health bar. Good luck and the best we wish you all!