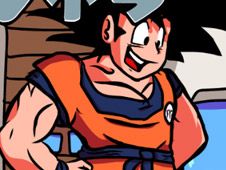 What is FNF Vs Goku?

Goku from DragonBall Z never refuses a fight, even if that fight was not one where he had to use his fists or powers, because today he has to take part in a musical battle, a new thing for him, where you will show him together with Boyfriend that this is not his anime world, but the music world of FNF, where we hope to see you defeat him on one awesome song known as 'Broken Limits'.

Go beyond your musical limits against Goku!

You simply have to hit the play button, as there is only one song, and your goal is to reach the end of it, with the only way of doing it is by playing all of the notes of the songs at the right time in their chart.

To do this, when arrow symbols match above BF's head, at the same moment you need to press the very same arrow keys, but know that if you miss doing it too many times in a row you lose.

It's simple enough for you to understand, so we hope to see you let the fun begin right now, and then maybe try out even more of our terrific mods!

Specials of the Day
ADVERTISMENT