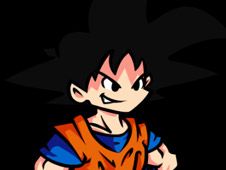 What is FNF DBZ X Pibby vs Goku?

Even Goku from DBZ has now gotten the FNF Pibby virus, so it is up to you and Boyfriend to defeat him in a rhythm battle, something that we invite you to do right now on the following tracks:

Defeat DBZ's Goku who now has Pibby in FNF!

In either mode you will play, to win you need to reach the end of the songs to win, something that is done by playing their notes according to the charts until the end. How?

Well, by pressing arrow keys at the same time as the identical arrow symbols match above BF. If you miss doing it multiple times in a row, the health bar depletes and you lose, so don't let it happen. Enjoy!