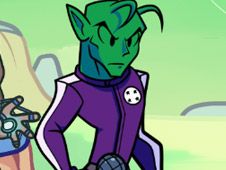 What is FNF vs Piccolo (DBZ)?

We love all our crossovers between FNF Games and Anime Games, especially when the anime we are talking about is a classic one such as Dragonball Z, without a doubt the most beloved battle action anime in history, which has created a new generation of anime lovers, and even if you don't regularly watch shows in this medium, you still know how Goku is.

Well, Goku is not the protagonist in this game, as Piccolo is the one featured, although he takes the role of antagonist, just like he was first depicted in the show before his son joined the Z Fighters. Instead of using energy beams or Kung Fu, since he does not have these skills, Boyfriend now needs to defeat Piccolo in a rhythm battle, something you help him with right now!

How to defeat DBZ's Piccolo:

Well, of course, you need to have a better rhythm and reach the end of the three songs while making the progress bar green, which is in your favor, by having sung or rapped the song properly, without missing a beat. The three custom songs from Piccolo's week are:

You will use the arrow keys to get the notes of the songs, having to press them at the same time as their symbols match above BF's head, and make sure not to miss singing too many notes in a row since that means losing the game and having to start again from scratch!