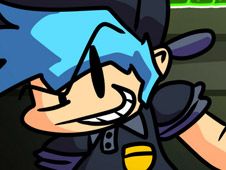 What is FNF Springlock Showdown?

The FNF Springlock Showdown is the latest crossover with the Five Nights at Freddy's Games category, as Boyfriend got a job at the haunted pizzeria, where you now need to help him survive all the nights he was contracted for, and do it on all the following songs:

Whether you choose to face your rivals in the story mode or free play mode, winning is achieved in the same way, by reaching the end of the songs and to do that, you need to hit your notes according to the charts until then. If you miss doing it too many times in a row, you lose and have to start again from scratch.

So, when you see floating arrow symbols match above BF, press the identical arrow keys. Missing means pressing wrong keys, right keys at the wrong time, or not pressing them at all. Good luck, enjoy!

DoomsDay but Sans is a Lean Drinker
ADVERTISMENT