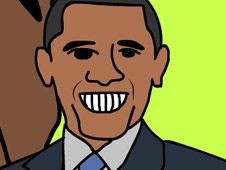 What is FNF vs Obama: Presidential Showdown?

FNF Presidential Showdown is a brand new mod featuring Obama, one of the most popular presidents in the whole history of the USA, so of course, he would make appearances in games, and it's not even the first time he has been here, so you should have plenty of reasons to check this out, even more so since the mod has two tracks to its name:

Whether you play in one mode or another, to win you need to do the same thing, which is hitting your notes according to the charts until the end of the song, winning once you reach that point, while not making too many mistakes in a row, since that leads to your loss.

To hit said notes, press arrow keys at the same time as the identical arrow symbols match above BF, who is sitting on the right. Good luck, we wish you the best, and hope to see you around for more fun to come!