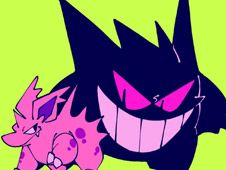 Pokemon Saturday Morning Showdown is a brand new FNF mod featuring this popular video game/anime franchise, where your rhythm battle on the song called 'Rival' will also be a Pokemon battle at the same time!

When the floating arrow symbols match above the character on the right, that is when you need to press the identical arrow keys to hit your notes, doing it until the song ends to win, while being careful not to miss your notes multiple times in a row, since your health bar depleting means you lose. Good luck, enjoy!