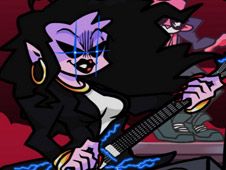 Mummy Must Murder is known for her amazing vocal skills, but did you know that she can also shred with an electric guitar? Well, that is a fact, and she is now once again facing Boyfriend, but this time both of them are playing guitar and are having an electric guitar battle, something that we hope you help our protagonist win, on all of these three songs:

To hit all the notes and play all the strings according to the chart of the songs, when it is your turn, watch for the arrow symbols to match above BF's head, pressing them at the same time as the arrow symbols above BF match with one another.

Do that until the end of the song to win, but be careful not to press them too early or too late, because that counts as a miss, and if you make too many misses in a row, you lose the battle. Good luck!