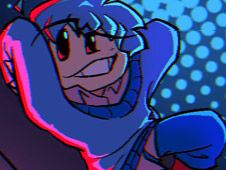 What is FNF: Saturday Night Swappin’?

As the title of this new FNF mod suggests, not only does the action of it take place on Saturday, but it also swaps around various characters and their role, so you have new protagonists, new missions, new villains to beat, and, of course, fresh music for you to enjoy, which we are sure you will do from beginning to end.

The structure of the three weeks this game has is as follows:

In either the story mode or free play mode of the game, give it your best to reach the end of the songs, play all their notes according to the charts, and win once you have done that accurately.

This means that you need to watch for when arrow symbols above the protagonist's head match with one another and then press the same arrow keys on your keyboard all the way until the song ends.

If you don't want to lose, make sure you don't press the keys wrong too many times in a row, since that will mean a certain loss after a few mistakes like that. Enjoy!