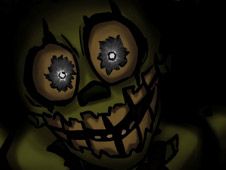 What is FNF Springtrap Sings Springlock?

Spinngtrap from Freddy's Pizzeria has made his return to the world of FNF Games right now, as once again Boyfriend has to defeat him in a rhythm battle to escape this evil animatronic, and this time you battle it out on only one song called 'Springlock'!

As the song progresses, when your turn to sing will come you will see arrow symbols matching above BF's head, a moment when you need to press the identical arrow keys, so that you hit your notes. If you hit your notes until the song concludes, you will win.

Be careful not to miss hitting too many notes in a row, because if that happens, you end up losing and having to start again from scratch. Good luck, and all the best we want to wish for you!