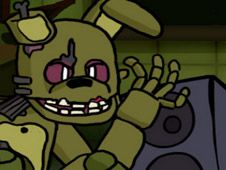 What is Friday Night Funkin’ vs. Springtrap?

The fun provided by crossovers between FNF Games and FNAF Games is always going to be top-notch, which is the reason why today you get to play a second game like that, as right at this moment we have added for you all the game called Friday Night Funkin’ vs. Springtrap, where Springrap is yet another robot toy from the Freddy's Pizzeria, and you and BF need to defeat it on the song called Nightmare, if you are to escape its horrors!

There is no story mode here, as the game only features a song, a song at the end of which you need to reach by hitting all the notes along the way, something you use the arrow keys for. Press the arrow keys at the same time as the arrow symbols above BF match with one another.

If you do that until the song ends and the progress bar turns towards you, you win, but be careful not to miss doing it too many times in a row, because you lose. Good luck, and we hope that you stick around for even more fun to come!