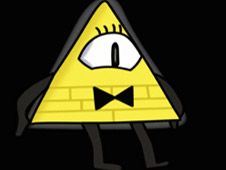 What is FNF Vs Bill Cipher (Fanmade)?

Bill Cipher from Gravity Falls has replaced characters from FNF in a previous week of one of our games, but today he becomes the main character and brings along some original music, as there will be an upcoming mod featuring him by two talented creators, and some fans have already created a mod inspired by it, which is here, and ready for you to enjoy it!

Use music to defeat the evil pyramid that is Bill Cipher!

Since there is only one song, hit the play button, and then give it your best to reach its end, winning once that happens, and this can only happen if you play all of its notes at the correct times in the charts.

To do this, watch for when arrow symbols above BF match one another, and, when they do, press the same keys from the keyboard. Missing to do that multiple times in a row will make you lose, so be careful not to let it happen. Enjoy!