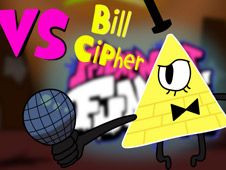 What is FNF Vs Bill Cipher?

Today we've got in store for you a brand new crossover between the Friday Night Funkin Games series and the Gravity Falls series because the game you are going to play today is called FNF Vs Bill Cipher, and it features this main antagonist of the series, a demon in the form of a pyramid who wears a bowtie and a top hat.

Now that the two universes have collided, only by helping Boyfriend defeat Bill can both of them be saved, and you will do this in a rhythm battle on the custom songs called Spookez and South, so go to Week 2 to play against this character!

How to play and win at FNF Games online:

You are going to use the arrow keys for hitting the notes of the songs, pressing them at the same time as they match above BF's head, and if you reach the end of the song and the progress bar is green, you win.

Make sure not to miss hitting too many notes in a row, because if that happens you lose and have to start all over again. Good luck, and all the best we want to wish you all!