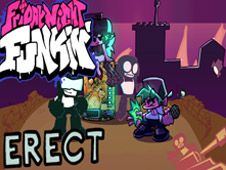 The new FNF Erect Remix mod of our website is a fanmade one of Week 7, meaning that we get once again the chance to go up against Tankman on his two iconic tracks, but which have now been remixed, so they will feel quite fresh:

In both the story mode and free play mode you need to reach the end of the songs by playing your notes according to the charts to win, so watch for the moment when arrow symbols match above BF and press the identical arrow keys at the same time. Be careful not to miss hitting too many notes in a row, since that will eventually lead to you losing the whole game. Enjoy!