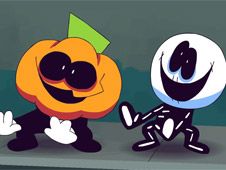 What is FNF Spooky Week 2 Plus?

It's with great excitement that today we are returning again to our category of Friday Night Funkin Games online, which has clearly become a fan-favorite ever since its inception, and right now in it, you get to play a special new mod called FNF Spooky Week 2 Plus. This is a re-work of the original Spooky Week game, where you won't fight the Spooky Kids on just two songs, but seven in total, with five new awesome songs being included:

Defeat the Spooky Kids, now on even more songs!

You can choose to face off against these Halloween characters in either the story mode or free play mode, and the goal you have is to reach the end of the songs with the progress bar being in your favor, to win. To do so, you need to have a good rhythm and sing the songs according to their charts.

To do so, when you see arrow symbols match above BF, press the same arrows on your keyboard, but remember that if you press the wrong keys or press them at the wrong times too many times, you lose, so don't go out of rhythm, and win instead!